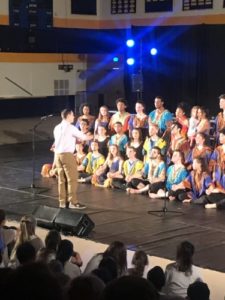 Bryant Huber, Rotarian and former Young American, conducts the troupe in one of their group numbers.

The Young Americans performing arts troupe returned to Ojai after a 15-year lapse to provide three days of master classes in the performing arts — singing, songwriting and dance. It all culminated in a high-energy, all-stops-out review on Sunday evening at Nordhoff High School auditorium that covered everything from Broadway showstoppers to the Beatles and Elvis.

This was the first time this particular 40-member group of Young Americans performed this show. They leave Tuesday for a 5-month tour in Japan. All told, there are more than 300 Young Americans who travel the country, and abroad, organizing performing arts workshops for low cost and maximal efficiency. By the end of the weekend, more than 150 local workshop attendees – ranging in age from 5 to 18 – were singing solos and dancing the Macareña and a professionally choreographed “The Circle of Life” from the “Lion King,” among other numbers.

This extravaganza was made possible by the Rotary Club of Ojai, which guaranteed enough participants and provided scholarships for those who needed them. Bryant Huber, a member of the Rotary Club, was also a former, five-year, member of Young Americans, organized the effort on the Ojai front, which included finding homes to house the troupe members. He also got to perform with his old troupe mates , including his wife, the former Carin Gross, whom he met on the YA tour. “With the challenges the arts face in schools with dwindling budgets, these opportunities become even more important,” he said.

Since its inception in 1962, the Young Americans have taught more than 756,000 students and taken 134 international tours. For more information, check out https://www.youngamericans.org/ 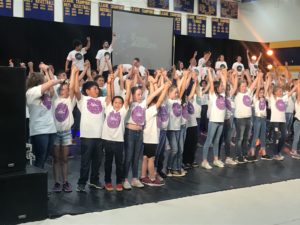 Young Americans, with their local performing arts students, perform the finale, “The Circle of Life” from the Lion King.