The Ear and Now

The Ear and Now

It’s been a disconcerting year so far in Ojai. Between the state’s largest-ever wildfire and the tragic mudslides with our near-neighbor Montecito, people feel off-center and far out of our comforting rhythms. 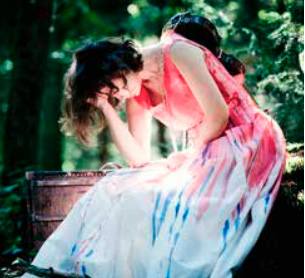 Ojai Quarterly:  What can we audience members expect from the 2018 Ojai Music Festival? How can it relate to this moment?  What should we be listening to? And why? Obviously, Dies Irae “Day of Wrath” seems bespoke for this time, but where else in the program can we listen deeply and find insight and understanding?

Patricia Kopatchinskaja: I like contemporary music because it speaks to us, to our times, not to the long forgotten times of the courts and churches. And in this contemporary music I just choose what speaks to me, what affects me, changed me, left an indelible impression. This I will bring to Ojai.

OQ: Particularly, the way you talk about Michael Hersch (Friday at 8 a.m. at Zalk Theater)  “as a composer who completely fits my imagination. In this darkness, I can see so much more than in the light,” seems like a key insight. You say we need to listen to music that isn’t pretty, that challenges our ears. Why is that? What can we learn from that experience?

PK: I may only be a little singing bird with very little brain. But birds get rarer and rarer in Europe, because of sharply declining insect populations. We already lost two-thirds of our bees. The climate warms up and up while our so-called elites assemble in Davos to endless talks about nothing more important than free trade, tariffs and globalization. Whole democracies are hijacked by big money, scientists are not allowed anymore to speak out their findings and warnings. My little bird brain cannot otherwise than be in deepest anxiety and the man who writes the music about this is Michael Hersch. He survived cancer and he is able to look truth in the eye.

OQ: The programming includes Ojai Festival favorites like Ligeti, Cage, Berio – along with unfamiliar names like Galina Ustvolskaja. Can you describe the selection process? How long has it taken? Did Tom Morris (artistic director) give you notes, was there a lot of back and forth? For an artist to have such an opportunity, it must have been stressful but also a lot of fun.

PK: Tom Morris gave me complete freedom within the limits of his budget and then took up any suggestion, elaborating, adapting to the venues, and, together with me, melting everything  into a meaningful whole. Indeed it was a lot of back and forth for a year, he is always taking meticulous notes, encourages me, thinks open but also practical. It’s safe to say that without his help we would not have a coherent and doable program.

OQ: About Galina Ustvolskaya: Her music seems long overdue for a reintroduction to modern audiences. What did Igor Stravinsky mean when he said about her music, “Now I understand the Iron Curtain?”

PK: Ustwolskaya wrote in Soviet times, you feel oppression and despair, you feel the Gulag, you feel muted hope of an undefined religious nature. One cannot explain it, but one just feels being behind the Iron Curtain. Ustwolskaya once heard well played will never be forgotten.

OQ: Having grown up in a talented family of folk musicians, how has that experience — that context — informed your own approach to music?

PK: My parents being folk musicians it comes naturally to me to look for folkloristic roots in any music. Folklore doesn’t need a translation or explanation; people understand it in a very direct, functional and human way. If you want your listeners to dance, play joyful and rousing, if you play at a funeral, play so sad and touching that tears stream.

OQ: As you know, there’s been a few folk-contemporary hybrids at the Ojai Music Festival — a particularly memorable one was a program of Percy Grainger music, who did such important work preserving these old tunes. Do you feel that in your work you are carrying on these folk traditions? Reinterpreting them for new audiences? What is your goal in this regard?

PK: I doubt if I have goals and I do not want to teach people. However, a lot of music from Bach to Beethoven, Brahms, Bartok, Berio is somehow rooted in folk music and if I find these roots I base my presentation on them.

OQ: How and when did you and Tom Morris connect? How did that conversation go?

PK: I think Tom noticed me because of the recommendation of his friend and former director of St. Paul Chamber Orchestra Bruce Coppock, but also my CD “Take-Two” where we recorded duets for violin and different instruments from a thousand years of music history. And then he just asked what I would like to present and with whom, this went very quickly and there we are.

OQ: What does the Ojai Music Festival mean to you? Before you agreed to be our music director this year, and someone would mention Ojai, what did that mean to you?

PK: Friends told me about it, but I did not know much about it, but then I learned of its impressive tradition, Stravinsky, Boulez, Krishnamurti, hippies and Flower Power.

OQ: Can you share some of your own observations about Ojai — its people, culture, nature?

PK: I spent just three days in the festival last year.  Ojai is incredibly beautiful, a sort of paradise. I can understand that people want to live here. I was very scared and sad to hear about the horrible fires that surrounded it — it’s truly a miracle that it survived.

OQ: The Mahler Chamber Orchestra is a big “get” for our festival. How did that happen?

PK: The Mahler Chamber Orchestra was the only thing Tom Morris had already in place with Esa-Pekka Salonen before I took over. But they are one of my preferred partners, I did my “Bye-Bye-Beethoven” project with them in Europe and they fit ideally into our plans. I love them very much.

OQ: Besides yourself, who are some “up-and-coming” talents that contemporary music audiences should be listening to?

PK: You should listen to the JACK Quartet, a daring U.S.-band playing what has to be played today. You will have a very rare opportunity to hear U.S.-composer Michael Hersch play his own piano music. And do not miss Markus Hinterhäuser play all of Ustwolskaya’s piano works, he plays with such force that his fingers bleed and the late Galina Ustwolskaya was wholly convinced by his interpretations. Ah Young-Hong is a remarkable singer and Anthony Romaniuk is a keyboard player with a rare improvisatory gift.

OQ: What do you listen to for fun? What are your favorites for exercise classes, road trips, the morning commute, etc?

PK: If not playing I often just prefer silence. For parties I love French Musette, Oscar Peterson. Sometimes I have to listen to current pop my daughter, 12, gives me. On my long travels I often listen to new repertoire to learn or to expand my knowledge.