More than 100 seniors at Nordhoff High School spent Wednesday morning interacting and interviewing nearly 40 local professionals about their dreams and ambitions during the Rotary-sponsored Connecting With Careers day. 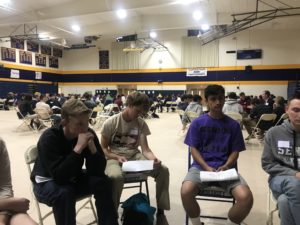 The students each chose three different career areas of the 18 represented, having a chance to ask questions and learn about the backgrounds of the adults – how they got where they were, the importance of having a plan, education and any life lessons they learned along the way. Each group spent about 20 minutes before rotating to the next.

Before breaking out into their groups, Kim Maxwell offered a rousing talk to the senior class. Maxwell is Ojai’s resident performing arts coach, writer, co-founder of the Ojai Playwrights Conference and organizer of Ojai Valley Little League. She urged the students to “be fearless, because fear is what holds us back from becoming who we were meant to be.”

Jamie Caliri, artist and highly acclaimed stop-motion director, said that he was reminded of his days at Nordhoff High School, when he was putting together a slide show of his photography. He begged the owner of a local photo studio to attend, and after much pestering, the man agreed. Caliri was hired soon and promoted quickly.

Dave Monson, first year principal at Nordhoff, made sure to thank Bryant Huber, who coordinated the Rotary Club-sponsored event.