From Ojai Chats to Deliberations

From Ojai Chats to Deliberations

On Wednesday morning, the Casitas Water Resources Committee (a subcommittee of Casitas Municipal Water Board) experienced the largest public turnout in recent memory of the CMWD. Concerned local residents, local business owners, water specialists and activists turned out for the meeting to exert pressure for the adoption of the “Three Sisters Water Plan,” proposed by the Water Advisory Group, an ad hoc committee of water experts who have spent two years researching water security solutions.

The morning meeting opened with a comment and submission by Jim Kentosh, the current Vice President of the Meiners Oaks Water District. The plan by Kentosh included a four-step timeline to tap into the State Water Project. Upon implementation, the plan would be finalized in 2022 — about the time that Lake Casitas would run dry if drought conditions continue, according to Casitas’ estimates. 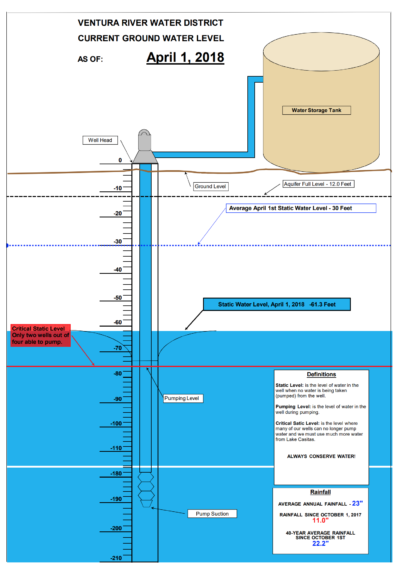 The specific issue with this plan is shared among most regionally integrated approaches to water supply; developing the necessary pipeline infrastructure would impede many private properties. Thus, the process to establish landowner easements if typically expensive, litigious, and reliant on the cooperation of multiple parties. Nevertheless, if adopted, this plan could serve as a long-term, alternative supply for the lake, which provides drinking and irrigation water for most Ojai and Ventura.

Thereafter, the committee heard a statement by Laurel Moore. Moore, as the proprietor of a local restaurant that relies heavily on local agriculture, suggested that Casitas entertain a more active role in using recycled water from the Ojai Sanitation District, “then Casitas could sell water twice.” Citing an article from National Public Radio, Ms. Moore suggested that the CMWD look into the strategies that have helped Orange County provide additional drinking water to 850,000 people. Whereas distilling non-potable water may be a tough sell when it comes to drinking water resources, there are still opportunities to optimize the use of grey water to the benefit Ojai for farm use.

Local entrepreneur Zhenya Muzyka expressed concerns that property values could decline if the water issue was not resolved expediently. Burton Lange, a retired teacher who studies water cycle and geology, expressed concern about tapping into a water table that “could take 100-1,000 years to recharge,” at the expense of Los Padres Forest. Lange requested a timeline for any such actions, and referred to the on-going Removal of the Matilija Dam Project, initiated in 1996, as the reasonable grounds for his request.

Once public comments were all heard, the committee began deliberations.

To open the meeting, Councilmember Russ Baggerly stated that the CMWD was developing a “Water Security Webpage” with information relevant to the water shortage emergency. CMWD General Manager Steve Wickstrum agreed that Kentosh’s proposal was aligned with his sensibilities; stating that water from anywhere always comes with some sort of cost – financial or environmental. Wickstrum cited salmon migration, the Matilija (Sandstone) Formation and a (potential) future meeting with Los Padres Forest District Ranger John “Pancho” Smith. He stated that he was “waiting to hear back” but that he wanted feedback to begin an “exploratory drill down” into Matilija Formation to review water quality and flow. One issue with water from this formation is that most seepage occurs downstream from homes in the valley, thus any measure would need to address that inefficiency and clearly include a plan for routing water to where it was needed. Later, Councilmember Baggerly stated that the Matilija Formation was only one of several options. Also under consideration were water-bearing formations: Hunkel, Coldwater and Cozy Dell.

Wickstrum indicated that drilling into the Matilija Formation was not really the most favorable option. He went further to state that the CMWB was sitting on a “golden opportunity” for collaboration with Calleguas and City of Ventura. Baggerly chimed in at this point to state that there were currently three plans underway, but that the focus for data collection at present were the “VerBos” (vertical bore) & “HoBos” (horizontal bore) plans, which both rely heavily on exploratory drilling and then eventually, drilling up to 7,000 feet into the aquifer. Baggerly stated that a preliminary report was prepared in 2016 by Jordan Kear, and that proposals were being garnered for the necessary data collection. Baggerly hoped that this process would be underway by this summer.

The council members then hopscotched on various data points, brainstorming the possibilities to avoid an uncertain future for Ojai water. Desalination, permaculture, and other grassroots solutions were confronted head on. One of the major proponents of the HoBos plan stated that if Ojai were to adopt these measures and buy into state water, “this place will change. It won’t be Ojai anymore.”

Thereafter, each proposed solution was confronted by an obstacle. A litigious, obscure network of dead-ends were lain before the concerned citizens, along with equally convoluted solutions. The situation was portrayed as an immutable monster with connected — yet estranged — moving parts. At one point, a council member suggested the scientific reclassification of steelhead trout in order to appease environmentalists.

The council suggested that they also needed to redefine the drought stages and solutions. Considering that Casitas only recently took over the infrastructure from Golden State Water, a review of their policies with a fine-toothed comb, to align with their new organizational system, seemed appropriate to attendees.

To underscore the point, Wickstrum also brought attention to the crumbling and neglected waterways that were inherited from Golden State. Golden State’s fall from public favor really gathered momentum with a water main that burst near the intersection of Signal Street and Ojai Avenue, shutting down both the 100-year-old Ojai Playhouse theater and the Village Jester. If that rupture is any indication, the whole infrastructure is at risk. Wickstrum cited multiple concerns about these needs, including pipes that were performing at less than 15% their capacity.

After reviewing the litany of projects that were delayed, protracted, overturned or otherwise stonewalled, Casitas finally agreed to the need for “regional collaboration.” There was a heated moment of pressing by Angelo Spandrio, a water activist. Upon his questioning, they replied plainly, “Yeah, that’s what we just said. We need to work together on this.”

Finally someone asked for a formal proposal, at which point a council member replied, “Yeah, we really should write some of this stuff down.” The council promised to deliver a timeline for the Horizontal Bore project within one month, with the help of Jordan Kear.

Finally, Baggerly said “Well, this is the largest turnout in the history of this board … It looks like we had better find a good lawyer to draw up the papers.”