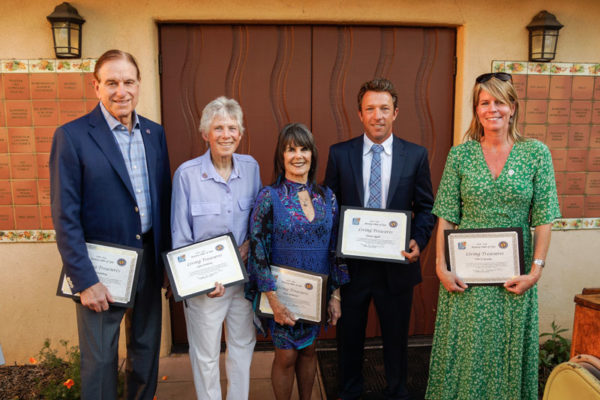 On a warm, sunny afternoon at the Ojai Valley Museum, a packed house was on hand to hear from last year’s Living Treasures, and to usher in this year’s awardees.

Dr. Fred Fauvre introduced the Living Treasure committee, a joint project of the Rotary Club of Ojai and Rotary-West. “Living Treasures was founded by Sanford Drucker, who fought in the Aleutian Islands during World War II and witnessed great loss of life. Living Treasures are meant to honor people who put service above self,” he said.

Last year’s treasures spoke movingly about the impact the award had on their lives, and how it has redoubled their commitment to “service above self,” as the Rotary slogan goes.

Aryna Swope and Phil Caruthers spoke about their various involvements, including the Ojai Valley Hospital Foundation and the Ojai Women’s Fund. Richard and Sheryl McArthur talked about their decades-long commitment to Boy Scouts, as well as the low-key but crucial support they give to Nordhoff High School’s theater department, and Sheryl’s work with a charity-driven sorority “and not to forget my knitting circle.”

Julie Hamman said that the award came at an especially trying time of her life, dealing with her brother’s end stage of cancer, and that it inspired her to get back to teaching, both dancing and singing, as a volunteer. She thanked her husband for providing the support that allowed her to donate her time freely. Bob Denne talked about the joys of joining the Rotary –West, especially the summer band concerts. Allan Jacobs died at age 77 last July, and Bret Bradigan spoke about Jacobs’s deep involvement with education — he helped found the Ojai Education Foundation with $25,000; the foundation now totals $4.2 million and has helped hundreds of students get off to a good start on their higher education — as well as his love for the outdoors, which manifested itself through his tireless service on the Ojai Valley Land Conservancy.

Al West, retired Deputy Supervisor of the U.S. Forest Service, expressed his gratitude to the many dozens of firefighters and first responders who got us through the Thomas Fire with very little loss of life.

Then this year’s treasures were announced:

• Alan Greenberg received multiple endorsements from various projects with which he is involved, including the Temple of the Oaks, Ojai Valley School and the paddle tennis courts he helped build.

• Lynne Doherty brought a large contingent of her fans and cheerleaders. Doherty was recommended by many people for her tireless service to the community, through the Ojai Music Festival’s Music Van and 27 years of playing French horn for the summer band concerts.

• Tobi Jo Greene, for her work with the young people of Ojai through the Youth Empowerment Workshops. “She’s taught a whole generation of young women in Ojai how to stand up for themselves and how to be in the world” said Bret Bradigan.

• Karen Evenden, co-founder of the Ojai Women’s Fund, as well as a stalwart with the music festival and hospital foundation, is also a well-known cookbook author.

• Trevor Quirk, an upper Ojai resident, who mobilized armies of volunteers and equipment to help with recovery from the Thomas Fire, which devastated his neighbors. His positive “can-do” attitude of looking out for each other summed up the spirit of the fire’s aftermath.

• Joyce Robinson, whose accomplishments were read to laughter as Dr. Rick Gould unfurled a lengthy scroll. Her illustrious career in education continues through her volunteer work with the Ojai Music Festival, among many other projects.

• David “Mr. Ojai” Mason, who Dr. Fauvre announced as the first-ever recipient of the Sanford Drucker lifetime achievement award. This is not meant to an annual award, but rather a special distinction of merit for people who have died during the past year who left indelible impressions on their community. Lenny Roberts was on hand to unveil a special plaque which will be prominently displayed at the Pergola entrance to Libbey Park.

For more information, check out OjaiRotary.org.