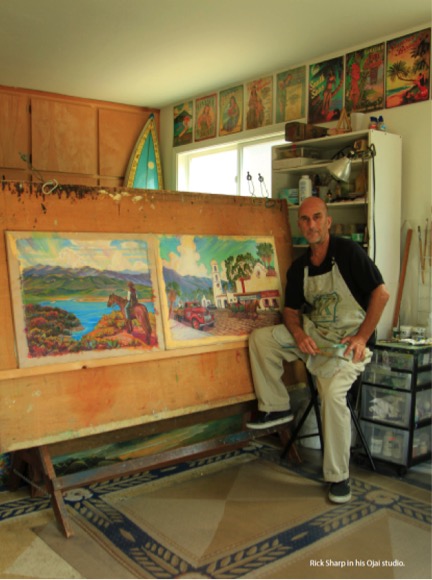 Artist Rick Sharp had been beaming about his art studio attached to his new Ojai home.  He was pleased and relieved to finally have a quality work space, and it showed.

“It suits my needs,” said Sharp, who’s lived in Ojai for nearly two years now.  “I’d been looking for something like this for some time.”

A lifelong surfer originally hailing from Texas, Sharp had a quiver of surfboards leaned up in one corner of his expansive studio.  A beautiful row of his vintage Hawaiian artwork hung near the ceiling.  There was a vast array of colorful paints, an arsenal of paintbrushes, sturdy easels and works in progress; those being his recent pieces depicting the vintage Ojai Valley.

Everywhere Sharp has lived his artwork has spoken for itself.   Some of his more notable works include the classic pen and ink drawings he created for Channel Islands Surfboards in Santa Barbara in the 1970s, and the Santa Barbara Fiesta posters that followed in the 1980s.  The fantasy-style paintings that he developed while living in Hawaii for nearly 20 years still hold strong in its tourism industry today, and that style carried over when he returned to the Santa Barbara region, this time in Carpinteria with his classic California paintings capturing some of the best surf spots in Southern California.

Since moving to Ojai, Sharp has quickly immersed himself in the natural beauty and spirituality of the region.  With the capability of capturing the essence of a place once he’s settled in, Sharp’s nostalgic artwork gradually projects onto canvas a time when things were much simpler.

“I love how the mountains surround the little township,” continued Sharp on the subject of Ojai.  “It really looks so classic California when you are headed up the road by the post office tower.”

Sharp has been enjoying exploring the Ojai Valley, seeking out those classic, sweeping landscapes and subjects that transport the viewer back to a time when Ojai was barely a blip on the map.

“My forte is nostalgic art so I’ve found areas in and around Ojai that look like it probably did a long time ago,” continued Sharp.  “I have painted scenes from Lake Casitas up to East Ojai.  I’ve spent a long time up at Dennison Park.  I love the view from up there looking back down into the Ojai Valley.  And of course what artist can resist the “pink moment” in the Ojai Valley at dusk?”

Several years ago Sharp began mounting his artwork on wood.  His California publisher was using plywood with a machine and Sharp begged them to be more authentic and organic but they disagreed.  So he set out to make his own hand-made wood signs on high-quality wood.

The technique is called Decoupage, and it was popular in America in the 1960 and ‘70s.  Sharp carefully selects each piece of wood at the lumberyard, making sure the grain and texture is just right.  Since Sharp’s artwork is so nostalgic, he believes it looks best mounted on wood and varnished.

“I also work each piece of wood over by hand to give it that vintage, weathered look,” Sharp explained.  “I love seeing my art on wood more than any other material.  It fits my vintage art theme perfectly.”

Currently, Sharp’s art is sold at Rains Department Store.  You can see his wide array of artwork at www.ricksharp.com.

“I always paint the place where I live and work,” he said.  “I think that is common among artists from every age.  Ojai has certainly had quite a few great artists living and working here over the years.  I’m lucky to play a small part in that lineage.”