In Niger, your dreams can only grow as high as the deepest well is deep. That’s because many of the improvement projects for this landlocked, desert country are constrained by the availability of water. That includes projects designed and supported by Ojai-based Nomad Foundation.

The next project for the foundation’s Tamesna Center, (as explored in Sarah Hart’s story in the Summer 2016 OQ) is a 650-foot-deep well to provide a sure source of clean water so the center can continue its expansion. The center — about a three-hour drive from Agadez, the nearest city — is a way station for thousands of Tuareg and Woodabe herders who come for the medical clinic, or for the opportunity to have their children educated at the school. They also come to play — with music and dance, and with racing camels.

“In order to expand our programs at Tamesna we need more water — that way we can have a garden to show people about better nutrition — we will focus on moringa, which is a complete food, easy to grow with little water and, when dried, very easy for nomads to transport,” said Leslie Clark, executive director.

The well won’t come cheap — the cost is an estimated $250,000 and will take two to three months to drill. Before the Nomad Foundation can start drilling down, they must first raise awareness. 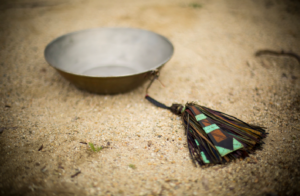 A Tuareg brass water bowl called a Tamenast is attached to handmade leather tassels that would be used to hang the bowl from a camel.

Toward that end, Sidi Mamane was among a delegation to Ojai in late January and early February. He, along with Mohamed Boucha, Niger’s minister of agriculture and livestock, presented information about their various projects at the District 5240 Rotary Club’s S.T.E.P.S. (Steps to Eliminate Poverty Sustainably) conference. Mamane then joined about 250  people for the premiere of “Road Trip Niger,” a documentary which featured a month-long cultural journey to the northwestern region of Niger, deep into the Sahara: the town of Iferouane, the gateway to the Tenere Desert and a once-flourishing market town, had not been visited by westerners since the Tuareg uprising in 2007.

Mamane is the elected mayor of the village of Ingall, which has a permanent population of 500, yet is the administrative hub for a population of 66,900. “It’s bigger than the country of Togo,” he said. Mamane has long been a leader of the region, since his youth in the 1990s when Tuaregs rebelled against the government. The Tuaregs strive to hold on to their nomadic culture, herding their cattle from one grassland to another in a vast region where the Sahel meets the Sahara on an ever-in-flux boundary.

Mamane is Niger’s representative for the Nomad Foundation, coordinating their projects in the region, including those of the Tamesna Center.

At the center of everything in this desert country, though, is water. “If we can create an effective demonstration garden (at the Tamesna Center),” Mamane said, “there are 20 artesian wells in the region, all flowing out into the ground. The people occasionally plant wheat, but there’s lots of wasted water, and people can learn to feed themselves better, and use it in a variety of ways people value.”

“With the nomads, you are not going to tell them what to do. You have to show them,” he said. 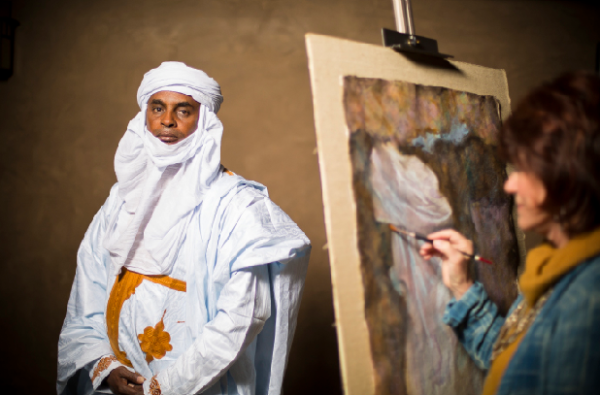 Leslie Clark (right) and Sidi Mamane (left) pose for a photo at Clark’s studio in Ojai. She hopes to raise enough money for a new, deeper well for Sidi and his fellow Tuareg nomads in Niger.

Unlike wheat, moringa trees can be planted once, and, once established, flourish and yield high-quality nutrition for years. “That’s the miracle of the plant, it’s the only plant that contains all necessary nutrients,” Mamane said. “It works so well, and makes so much sense.”

It’s a delicate balance to provide modern services while helping a distinct and colorful culture flourish — one which has followed its folkways for thousands of years.

“We have to change the mentality of the people about health care and education,” Mamane said.

It’s beginning to work. In the past, young children usually worked as herders — and were rarely in one place for any significant length of time. Now, Clark said, the top class of the school are such quick learners that “all skipped a grade together.” Many will continue their education through our equivalent of junior high school in Niamey, Niger’s capital.

Mamane said “We hope a few highly educated nomads, who don’t want to go to into the towns, will become teachers and return home to work for our people.”

The “Road Trip Niger” film, directed by Benedicte Schoyen Clark of Born to Play Productions, featured her husband (and crew and resident musician) Ned Clark, Leslie Clark’s aunt, as they spent a month traveling to “the poorest, hottest, and most remote place you can think of.” It is an easy-going, picturesque travelogue about Niger’s remote beauty and colorful culture mingled with facts about its many challenges — poverty, illness and warfare. It delivers an emotional impact as the lives of these nomads are revealed through everyday details like dealing with a broken-down Toyota, or the hierarchy of who gets to the use the community well and when. The Clarks’ friend, Cooper Bates, and Rotary Club of Ojai members Bob Davis and Larry Beckett, were aiding the efforts along the way.

One among many touching moments is when a chieftain of the Timia Oasis urges the film crew to spread the word about the area’s stunning beauty to promote tourism. Due to years of warfare and turmoil along the borderlands of failed, or near-failed states, Chad and Libya, tourism has vanished despite the recent, relative peace and stability. Niger’s rich deposits of uranium are also unmined, as low prices make it unprofitable, though the world’s third-largest mine is in the Agadez region. 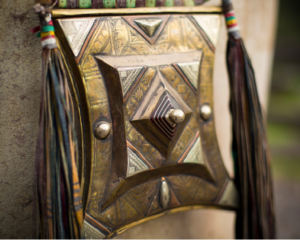 At one point in Niger’s recent history, Leslie Clark said that profits from the uranium mining were promised to the Tuaregs to help them improve their lives with infrastructure and good jobs.  “The uranium issue, with the low price of uranium, is now faded,” he said. “Mines have closed and so there is no chance of money flowing into the population from them.” However, one lasting impact of the mines is that some local wells have been contaminated.

Niger has been remaking itself with help from nonprofit groups, like the Nomad Foundation, and government organizations such as the World Bank. The Tuareg people, numbering about 5 million, are participants in the government since 2011, though Clark says that represention is not proportional. Among key Tuaregs in the current government, voted in 2011 and re-elected in 2016, are the Prime Minister, Agriculture Minister (see interview on next page), and the Minister of the Budget.

The Tamesna Center is entirely self-supporting, Clark says, except for the salary of the school teacher, which is paid by the government. The self-reliant culture presents its challenges, but the deep well will bring a stability and widening range of opportunities for the ages-old culture.

The screening of “Road Trip Niger,” despite coinciding with Superbowl Sunday, was a success, raising more than $23,000, which will purchase a specially equipped motorcycle ambulance. The ambulance will drastically reduce “by many hours” the amount of time it takes to get people to care on the rough roads that connect the Agadez region, Mamane said.

Sidi Mamane has visited Ojai several times over the past 20 years. “People in Ojai have a social awareness and are so connected to each other and to the natural surroundings,” he said.

In the Sahara Desert, An Oasis of Ideas Springs Forth

As the Republic of Niger’s Prime Minister for Agriculture and Livestock, Mohamed Boucha has a busy job. He manages the resources of a country of 20 million with 40 million head of cattle, in which agriculture makes up 40 percent of its economy.

Boucha has held his post since 2011 and was recently in Ojai, taking part in the Rotary Club’s S.T.E.P (Steps to Eliminate Poverty) conference at the end of January in Thousand Oaks. He was a founder and past president of the Rotary Club of Agadez, Niger.

In the style of Modern Farmer magazine’s “Ask an Ag Minister,” Ojai Quarterly sat down with Minister Boucha to discuss his work, its challenges and its importance, as well as his impressions of Ojai. Leslie Clark, Nomad Foundation founder, helped with the translation from the French-speaking Minister Boucha.

OQ: Niger is a growing country. What are your day-to-day responsibilities?

MB: We’ve got many, many projects — some new, some continuing. Since the end of the civil war (a rebellion of Tuareg nomads in the late 2000s) we’ve had a lot to rebuild. The ministry decides activities with its partners (local officials as well as other government agencies) and formulates plans of action, and works with the USAID (The United States Agency for International Development) and the World Bank. We are now working on a community project for herding, helping with the health of everyone.

OQ: Does the job require a lot of travel, or are you mostly stationed at the capital in Niamey?

MB: I travel a lot, evaluating the needs of each region — helping to build on the resources of the various districts. There’s lot of administrative duties, too; managing the staff, their vacations, retirements.

OQ: To the north of Niger are Chad and Libya, two countries with porous borders. How does that affect your country and its livestock?

MB: Herders roam across the borders with Chad or Libya. Their herds have diseases (hoof-and-mouth, for example), and our local herds have no immunity. So a big part of my job is work with veterinary clinics, to regulate them, to get animals vaccinated.

OQ: In Niger, it seems that arable land is scarce. Does that create conflicts, as it did in our old West?

MB: Yes, I also have to regulate conflicts, range wars between herders and farmers. We have to designate certain areas, and no one is allowed to farm there.

OQ: Since agriculture and livestock are so important to Niger’s economy, how does that relate to your ministry?

MB: I track market prices for crops, and publish journals for people who follow those prices. I also form strategies to help with the marketing and to increase the value of our products.

OQ: Niger is on the front lines of the desertification of the Sahel (the grasslands south of the Sahara). How is that affecting your country?

MB: The Sahara is still growing (a famine struck Niger in 2010 when its crops wilted in the heat — 350,000 faced starvation) and we are working very closely with efforts to plant trees and stabilize the erosion.

OQ: How many times have you visited the United States?

MB: This is my third trip to the U.S. The previous trip was in May 2016, to Washington, D.C. where we negotiated the Millennium Challenge Corporation grant of $437 million. (The grant is designed to “strengthen Niger’s agriculture by improving access to water, infrastructure and markets,” according to the MCC’s announcement.

OQ: The world is getting smaller through technology. How does affect your job?

MB: I’m very active with connecting with other ministers, as well with my fellow citizens. They know how to reach me, and they do. It’s just another thing I do because I can.

OQ: What are your impressions of Ojai?

MB: In Ojai, the farmers and the herders are people who are very attached to the land. There’s so much biodiversity — the deer, the birds and plants, and the land is conserved and protected.

OQ: What motivates you?

MB: I love to find out people’s needs and respond to those needs.

OQ: What’s next? What do you plan to do after your terms as Minister?

MB: I’d likely work in administration, accounting or consulting. I’ve had experience in technology, too. I started the first internet café in Agadez. But when I’m done with government, all I want to do is to be good. The rest is in God’s hands.